Where is the "Pot of Gold?"

Where is the "Pot of Gold?" 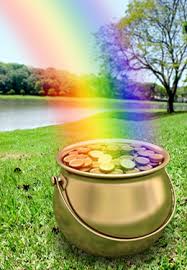 Being human beings and not angels we often desire material comforts and worldly recognition. Many rich and famous personalities who have searched for happiness and success in material things have reached the end of the rainbow and indeed found no pot of gold. Indeed Allah Ta'ala has kept the real pot of gold i.e. true happiness, peace of mind and eternal prosperity ONLY in his deen (Islam). This true happiness we will not find anywhere else but in the Deen of Islam.

Allah Ta'ala the Most Wise says :

We have included two present day inspiring stories of Muslimah's who have "reached the top" materially and then later discovered that true success and happiness lies not in worldly riches,pleasures and fame and but in the sublime and noble Deen-ul-Islam.

Queenie Padilla shares her rebirth after performing Haj in Makkah

By all accounts, a young Filipino singer-actress dubbed "the future leading lady" was on her way to stardom before she had a spiritual rebirth.

Queenie Padilla was starring in primetime TV shows and would sing and dance in production numbers on popular variety shows in the Philippines. She was the other half of a romantic pairing ("love team" in local showbiz parlance) meant to set hearts aflutter. At 20, she was living her dream — or so she thought.

"It was a deceiving dream," Queenie told Arab News as she sat wearing an abaya and a veil on her head. Devoid of makeup, her face is just as angelic and even more beautiful than when she was all dolled up for guest appearances and shows.

The Saudi media had recently picked up on the story of the Filipino celebrity who went to Makkah and came back with Islam reignited in her. After performing Haj for the first time, she declared to all and sundry that show business was now behind her. The YouTube video in which she tearfully shares her life-changing Haj experience was going somewhat viral; it was garnering likes and getting shared and re-shared among Muslims, and not just in the Kingdom. "Inspiring" was the consensus.

What triggered a 180-degree turn for the young lady who was dead-set on pursuing a showbiz career a mere four years ago? How did the decision come about? And, how did she break it to her fans?

Queenie said she had been so worried what the producers, directors, managers, and especially, her fans would think. Everyone had expectations of her and she was feeling the pressure. She had to ask herself: "Am I going to live my life disobeying Allah or am I going to make the final decision in living my life as a good Muslim and really practice Islam the right way? There was a struggle but I had to make a choice. So I made that choice. I quit."

Queenie calls herself a revert to Islam because it was only eight months ago that she embraced her faith wholeheartedly after visiting her mother in Australia, where she grew up nominally Muslim with her two sisters and their youngest brother.

Her father Robin, who comes from a big showbiz clan, famously married Queenie's mother in Muslim rites inside prison as he was serving a 21-year sentence for illegal possession of firearms in the early 90s. He was pardoned by the then president, and he left jail in 1998 no less famous than when he entered it. He remains one of the Philippines' most bankable action movie and TV stars to date.

The busy life of a celebrity didn't leave much time for Robin to educate his family about Islam as much as he would want, but Queenie credits him nonetheless, because if it weren't for him they would not be Muslim.

"When I went to the Philippines, my father told me to wear a hijab and pray. But I didn't know why I was praying. I was ignorant about Islam and about being Muslim. At that time I hadn't yet tasted the sweetness of faith. I think that's why I was misguided."

Their mother started practicing Islam herself just two months before Queenie did, and she let her eldest daughter know her desire for her children to become good, practicing Muslims. Queenie says that when she first saw her mother after the latter rediscovered Islam, she was pleasantly "shocked."

"I saw this glow in her that I've never seen growing up as a child. Everything that came out from her mouth was all about Islam and Allah. And she was reading the Qur'an constantly and listening to lectures and she wore the hijab. I asked her if she was afraid of wearing the hijab in this society. She said she wasn't because she has piety, and that's all that matters."

Over dinner, they would have conversations about the Hereafter and whether or not they obeyed Allah with their deeds and actions.

"It got me thinking," she said. "I started evaluating and asking myself if I was really happy with my job, and I realized that there was something missing in my life. There was emptiness inside. I wanted to feel what my mother was feeling because she was so happy and content — and peaceful. I told her, 'Oh please, I want to learn more about Islam."

And she did. As she learned more about Islam, she knew she had found what would fill the void she was feeling: renewed religious fervor.

"It was an amazing feeling. I think it was a calling from Allah. The more I learned about Islam, the more it became my passion. And every day, when I gained more and more knowledge, the missing parts of myself began to grow. The emptiness is gradually going away too," she added.

Queenie went to the Kingdom solely as a pilgrim and not an actress, although she met the Filipino community just the same. She visited the International Philippine School in Jeddah and other Saudi private schools where the students' reception was uniformly warm.

Her most unforgettable experience in her brief two weeks here, however, took place in a hospital where she visited a 30-year-old Filipino woman with a rare form of cancer. Queenie prayed for the patient who dreamed of going to the Kaaba. Shortly after, the woman reverted to Islam and declared her formula of faith in Islam, making Queenie "the happiest person alive."

"The patient awakened me in a way; she reminded me that sickness or death could hit us anytime. Every day as Muslims, we should prepare," Queenie said.

Queenie's parents, now married to different people, are very happy over her decision to fully practice her religion. Her next mission is to share more about Islam with her sister Kylie, who is an up-and-coming star in her own right back home. Queenie also plans to major in business, and at the same time, take up Islamic studies.

These days, Queenie speaks with a conviction not previously seen in some of her TV interviews, in which she appeared reserved and even a little nervous. She has transformed into a lady who conveys the message of Islam to people with courage and confidence, even if she admits her knowledge is still limited.

Queenie — or Khadija, the Muslim name she recently adopted — is sure to lose fans once she leaves the glare of klieg lights completely, but she looks to have gained new ones in her journey of proclaiming her faith.

I often reflect on my life and experiences with a mixture of sadness and exuberance. I always considered myself as hailing from a privileged background. I attended prestigious private schools, I excelled academically and always felt so loved and cherished by my parents. I recall how I was always the best-dressed of my friends and how I was always admired for the cars I drove and the luxuries I enjoyed. But my life was a shallow and empty one!

I matriculated top of my class, I married soon thereafter and studied all my life. I have 4 kids and 3 Law Degrees but those are not what I consider my achievements. I was caught up in a world of facade and parade. There was never enough! Never enough enjoyment,  never enough jewellery, never enough designer wear and always drama as a result of my flashy lifestyle.

I experienced the loss of loved ones but though I felt the pain of loss-My life remained mostly unaltered. Then suddenly Allah SWT directed me to Him and accepted me to study Deen(Islam). I was invited to meet people who were involved in Deeni (Islamic) and Dawah work who shaped my life. I came to terms with my regrets, my perspectives changed, my circle of friends changed, my standard of living changed and now, everyday I strive to gain the pleasure of My Creator. This is how I have come to accept what I previously thought was beneath me-I am able to turn the other cheek to people who have ripped my heart out and trampled on my dignity.

I turn to My Allah and ask for halaal rizq (sustenance) instead of an abundance of wealth earned in questionable ways. I am now appalled by behaviour I previously found acceptable-I now have learnt how to be cautious with whom I interact with and to dress modestly. There have been so many times when I have been degraded by people who have rubbed my face "in dust ". Many think they are providing rizq and putting food on the table for us…. I have been humbled and it made me turn my attention more to Allah and submit to Him alone.Alhamdulillah made me a more content.

I have been belittled because I no longer own a house but I am grateful to be bond and interest free. My family have been frowned upon for "not living with the times" but we kept  our contact with deen and Allah never shunned and disappointed us. He was always there to provide comfort in times of the most adverse conditions. My life has been a "roller coaster ride"… but I am so glad, grateful and fortunate that I found Allah along the way!

To my esteemed ustaads , muallimah's (teachers) and siblings I am eternally grateful. I Trust in Allah and now turn to My Allah and  make dua for Him to grant me strength and courage to obey Him, follow His beloved Messenger Muhammad (peace be upon him) and for sufficient halaal Rizq instead of ill-gotten surplus. I forgive and try to forget because I am a sinner too! I eagerly await the next article from  EIslam because I know how it impacts on me and thus I have submitted this-just to let others know what a difference these amazing educators have had on my life. I request your duas, one and all.

A Fortunate and Appreciative Muslimah from South Africa.

We hope you have benefited from these beautiful and inspiring stories and we sincerely pray that Allah guides us towards Him.

"Truly, Allah does not change the condition of a people until they change what is in themselves." (Quran 13:11)