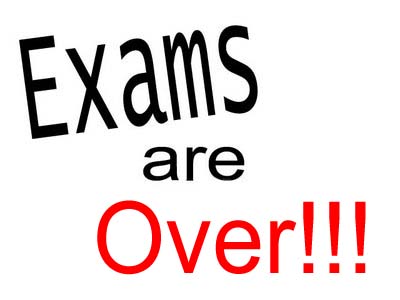 We tumbled out of the exam hall with great haste trying to get as far away from that agonising place. Grateful that it was all over we ran around slapping one another on the back and wishing ourselves good-luck. I saw Paul running to me with great excitement.

"Yup, it's been a rough week, but all over," I answered, "Never want to see another exam in my life!"

"So what you going to do now," I asked, half knowing the answer after spending six years with Paul at medical school.

"I, my good friend, am going to have a great party tonight. And I am going to drink till I pass out. Then I'll deal with tomorrow...," he shouted as he rushed off to greet another classmate.

I felt a little jealous that he could go out and have a great party, do the things he wanted without restrictions. I felt cheated that after having gone through the same agonising week I could not "Just do it!" For me I knew it would be a night of supper with my parents, and then sit with the guys and talk rubbish until the late hours of the morning. Our greatest crime of the night being a couple of cigarettes and some serious junk food.

I didn't hear about Paul until our class reunion 15 years later. It was a noisy affair with everyone struggling to get their best medical school story remembered. We recounted the strange doings of medical students and some very embarrassing moments like when Jakes fainted onto the patient while examining her and when Jonathan in his nervousness asked a male patient how many times he had been pregnant. Each story brought rounds of raucous laughter until I asked: "Guys, whatever happened to Paul...Paulie....tall guy..er..Sterling"

A hush fell over the table like a damp blanket silencing even the clinking of the cutlery; I shifted awkwardly in my chair. Nervous as an accused in the dock I looked at the silent faces around me not knowing what to say next until Jonathan explain in almost hushed tones... Paul went out drinking that night and got involved in a drunken brawl in which he stabbed a man, he was sentenced to two years in prison and when he got out he was hooked on drugs and committed suicide three years later.

I left the function early that night, my head still quivering with the news of Paul and went straight to my mother's house. I hugged her a little tighter than usual and she looked at me quizzically but didn't say a word. Somehow mothers know what lives in their children's hearts. I then went home and sat at my little daughter's bedside for a long time. Her sleeping face radiated innocence and I prayed that Allah Ta'ala would give her parents the ability to raise her as my parents had raised us. Despite the pressures of modernisation to change their attitudes they always taught me what was Islamically correct and guided me to the path of Deen.

Sitting in the dim light of her room imagining the pure thoughts and dreams floating in her head and I thanked Allah Ta'ala that He guided us to a path that was filled with benefits in this world and the next. A path that may seem restrictive or narrow, seemingly devoid of the 'pleasures' of this world, but one which gave a person dignity and honour in this world, safety and protection at the time of leaving this world, and eternal happiness in the Hereafter. I shivered, not so much from the coolness of the evening, but with the thought of what could have happened to me if I had I joined Paul that night. Would I also have seen my life destroyed in the pursuit of a few moments of pleasure? Rather the restriction of a few moments and pleasure for eternity; than a brief sojourn in luxury and the displeasure of Allah Ta'ala. I kissed my daughter on her tiny forehead and filled with gratitude of being Muslim and recollected a Hadith that explained this better I could ever do:

Abu Musa (May Allah be pleased with him) reported: The Messenger of Allah (PBUH) said, "The guidance and knowledge with which Allah has sent me are like abundant rain which fell on a land. A fertile part of it absorbed the water and brought forth profuse herbage and pasture; and solid ground patches which retained the water by which Allah has benefited people, who drank from it, irrigated their crops and sowed their seeds; and another sandy plane which could neither retain the water nor produce herbage. Such is the similitude of the person who becomes well-versed in the religion of Allah and receives benefit from the Message entrusted to me by Allah, so he himself has learned and taught it to others; such is also the similitude of the person who has stubbornly and ignorantly rejected Allah's Guidance with which I have been sent.'' (Al-Bukhari and Muslim)