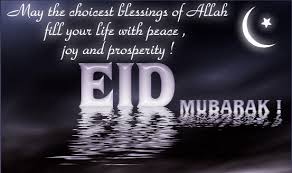 The Month of Ramadaan is coming to an end and the transition from Ramadan to Eid and thereafter  should be a path that brings us closer to our Creator and a path that treads the Sunnah i.e. The way of the Messenger of Allah (peace be upon him) .

After a month of sacrifice, Allah Ta'aala takes it upon Himself to reward His faithful servants. Allah Ta'ala is the Most Generous and Most Benevolent. Indeed Allah Ta'ala's Generosity multiplies in Ramadaan. When Allah Ta'ala sees His servants carry out all their duties  faithfully and strive to gain closeness to Him through their Fasting ,Salaat ,patience ,recitation of Quraan ,zikr ,dua ,and controlling of even permissible desires  and needs like food, drink etc. then Allah Ta'ala bestows on His faithful servants a special prize on the night preceding the day of Eid.

THE PRIZE GIVING NIGHT:  Allah Ta'ala bestows the rewards on those who have spent the month in His obedience and all their Du'as (prayers) on such an occasion are indeed accepted. It has been the practice of The Messenger of Allah Ta'ala (pbuh)that he would not sleep during the night preceding  Eid-ul –Fitr, this night has been named Laylatul Jaaiza (The Prize Giving night). The night when the faithful and obedient servants of Allah Ta'ala are given the true reward. To benefit from this opportunity, one should exert in prayer and ask Allah Ta'ala for all our needs.Our Beloved Rasulullah (Salallaho alaihe wassallam) said: "The person who stays awake on the nights preceding the two Eids occupying himself with ibâdah(worship), his heart will not die on the day when everyone's heart will perish." (His heart will not die during the time of evil and corruption). It could also mean that with the blowing of the trumpet his soul will not become unconscious. (Hadith –Ibn Majah)

EID-UL-FITR: Celebrated on the first day of Shawwaal, at the completion of Ramadhaan. Shawwaal is the 10th month of the Islamic calendar. Eid-al-Fitr is a very joyous day for the believing men and women. On this day Muslims show their real joy for the many blessings Allah Ta'ala has given to them to fulfil their obligation of fasting and other good deeds during the blessed month of Ramadhaan.

SADAQTUL FITR-Islam has prescribed a simple yet graceful way to observe this happy day. First of all well off Muslims start their day by giving charity Sadaqtul Fitr to the poor of their society, so that the less endowed can also enjoy their day along with others. Ibn Abbas(RA) said that the Messenger of Allah Ta'ala (pbuh) enjoined Sadaqatul Fitr so that those who fasted  may be purified of idle deeds and shameful talk committed during Ramadaan and so that the poor may be fed. Whoever gives it before salaah( even days before) will have his obligation accepted, and whoever gives it after salaah it will be an ordinary charity.(Hadith -Abu Dawood)

SUNNAH ACTS ON THE DAY OF EID:

THE EID PRAYER-And then comes along the morning of Eid, Allah Ta'ala sends down the angels to all the lands in the earth, where they take their positions at access points of roads calling out with a voice that is heard by all accept man and jinn. Allah Ta'ala then says: I call you to witness, Oh my Angels that for their having fasted during the month of Ramadaan ,and for their having stood before me in prayer by night, I have granted to them as reward My pleasure and have granted them forgiveness.-Allah Ta'ala will then say…,Oh my servants ask now of Me, for I swear by My honour and My Greatness, that whatsoever you shall beg of me this day in this assembly of yours for the needs of the Hereafter ,I shall grant you, and what so ever  you shall ask for your worldly needs shall look at you favourably. (Hadith-Targheeb)

Jubayr ibn Nufayr (RA) said: 'When the companions of Allah Ta'ala's Messenger (peace be upon him) met on the day of `Eid, they would say to each other, 'TaqaballAllahu Ta'ala minna wa minkum (may Allah Ta'ala accept from you and us )." (Fathul  Bari ).

TIPS ON HOW TO SPEND THE DAY OF EID:

BE CAUTIOUS!- Avoid excessive indulgence of any kind and stay away from places where the laws of Islam are violated. It is a joyous occasion indeed and let it be spent in ways that are pleasing to our Creator. Use the day profitably to earn the pleasure of Allah Ta'ala and continue to do so everyday.  A Muslim is Muslim for life and not just during Ramadaan.

WHAT NOW AFTER RAMADAAN…We leave the month Ramadaan, its beautiful days and nights,we leave the  Month of Mercy, Quraan , Taqwa and Ibadat, sympathy ,forgiveness...we need to ask ourselves: Ramadaaan is over and what have we gained?

Ramadaan was a 30 day course on self restraint and piety , have we graduated from the course having learnt to fight our desires and defeat them..? Have we recharged our spiritual batteries and gained Taqwa (Allah consciousness)? If we have …then ALHAMDULILLAH (Praise be to Allah)…now let us continue to obey Allah Ta'ala and ask Allah Ta'ala to keep us steadfast. Ramadaan is over and Shawwal has come,  let us save the changes that we all made in our lives during the month of Ramadaan. Let Ramadaan not be a final destination but a stepping stone to greater good from now on. We need to make a firm resolution to continue with the momentum and lead a life of piety and free of sins. We now face another eleven months after this training. Let it be that we come out stronger and better servants of Allah Ta'ala…AMEEN!