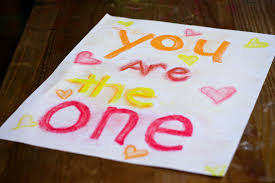 As a pretend statistician, I'll say it's statistically proven that females are more prone to being caught up in idealistic romantic notions of love especially since we tend to be more emotional beings and brainwashed by fairytales of damsel's in distress and the knight in shining armour hype. Naturally, as a young girl, I had far too many self-edited fairytale re-runs constantly playing in my head.  My excitement was always in anticipation of when my prince would romantically woo me, with me being obviously unaware, just as it was in those fables.

Truth be told, I was always aware that those fables were indeed far from reality, so nothing surprised me and every person seemed fairly predictable. But even so, I hoped for a miracle - someone original to sweep me off my feet.

And then I was approached…I was given the longest love letter, ever. I was flattered that Someone had taken the time to write to me and was most definitely intrigued. But - I didn't really know Him. So I thought, at least let me, hear Him out, after all, there was a great amount of effort put into this letter.

In all honesty, it was quite entertaining. The letter reflected warmth, beauty, bravery, it was so inspiring. It was like a dream sometimes where good battled and won over evil. There were heroes overcoming their weaknesses, there were love stories (my favourite) and other stuff, but really, the whole thing was about me. I knew this because my name was written all over the place. I was totally in tuned with the Author and was taken aback at how He knew so much about me.

Everyday I got presents from Him too. Now, I'm not the type to get bought over, but these gifts were too nice to return to sender, if you know what I mean.

So, I'd read portions of His letter everyday...and to be honest, gifts aside, He really started growing on me and the more I'd read His letter, the more attached I became to Him. Even though I didn't meet Him yet, I really started to like Him. The more I read, the more love I felt . He seemed to tick all the right boxes; He was knowledgeable, spoke about every topic relevant from animals to society and its challenges. He always made me feel so special by making reference to me, all the time. He would go on and on about how He would do anything for me… I just had to ask. So that was nice.

He got me thinking. I mean this was it. It's the moment we wait for our whole lives. The magic moment that reroutes your future in a simple decision. But as my eyes got bigger, I'd keep reading things in this letter, that I wasn't sure I was ready to hear. There was a commitment, yes indeed a BIG one!

I was at a crossroad. Take Him or wait for someone else. The decision, however, was clear and there was no real choice to be made. It was more like a one way street than a crossroad. He promised to listen to me, when everyone failed to understand me.

He'd appreciate my humour, understand my emotions and my demeanour. He promised to never break His promises. Could I really believe Him?

He said this whole world and everything in it was nothing compared to me. His words kept on taking my breath away. He seemed so perfect and I felt so honoured and fortunate. I realised I found the One! As the letter began to conclude, He then beautifully and eloquently said…

This love letter was the Qur'aan, obviously, and the perfect One indeed is. ..ALLAH, THE GREAT.

You see, before I wrongly assumed this craving for love and understanding needed feeding from a human. And while being fully aware of humans and their flaws and predictabilities, I never saw the One who was always there.

I realised it was Allah that was always will be my first and true love.

The point is that we all have this insatiable gap that needs feeding and we're always craving to feel complete. It's an unsettling feeling knowing something's missing. And until we begin to realise that it can only be filled with accepting Allah's love, we'll forever be searching for temporary fixes that promise no certainty.

Without any judgement, it's understandable in our modern life age to blindly hunt for short-lived reliefs to numb the nagging aching in our chests – after all, we've been coached since young to seek out quick fixes. But it's no reason to your life's betterment to insist on this sort of addictive cycle.

We don't have to wait until we all eventually reach the moment of 'Heeeelp! My cup runneth over!'. It'd be a good idea to nicely sit your sub-conscious down for a no-nonsense one-on-one family meeting, and make it realise that so long as it goes on autopilot in search of completion in anything or anyone outside of yourself, it and you will always feel unfulfilled and super sucky. Being consistently strong in a new way of thinking, trains your sub-conscious to new automatic patterns. Look for permanent freedom - not temporary relief peeps.

Another point to note is to avoid placing the unrealistic expectation of finding perfection in a partner. Everything we've been conditioned to look for in a spouse, is in Allah in perfection, so rely on Him alone to see to your needs, and share your joys with your spouse.

Allah is indeed the Only True Love, He is First and Last, His Love is a beginning without an end, His promises are all true, all we need to do is Love Him  and love for His Sake and when every other Love dims the Love of Allah will still shine bright!