Fill the Bucket this Ramadaan 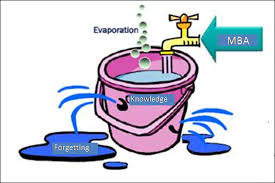 "Sheikh, Ramadaan soon," said Omar, his gruff voice making him sound a lot older than his 28 years, "We will really have to exert ourselves this Ramadaan!"

"Yup, we really gonna have to try and do a lot this Ramadaan," chorused Ridwaan.

Sheikh looked at them and whispered, "Or not to do."

Omar jerked his head in surprise and looked at Ridwaan, searching for an answer. Ridwaan raised his eyebrows and shrugged his shoulders. The group looked at one another with skewed glances but said little until Omar mustered the courage and broke the silence, "Did Sheikh say not to do?"

They looked at one another for some clue, something just wasn't right.

Zaid, unable to contain himself and ventured softly, his voice barely audible from his usual position against the wall at the back, "But Sheikh always told us that this is the month to capitalize, to take maximum benefit of the time and to really … how you say…stock up."

Sheikh Hamaad's lips curled into a soft smile as he placed his tea on the little ornate wood table beside him, "True, I did say that you have to work hard and earn rewards. But let me give you an example – if you have a bucket, how long will it take to fill up?"

Omar's face lit up, he adjusted his specs, and in his a very professional tone said, "Depends on many factors – what's the rate of flow of the water, how big is the bucket, what is the size of the opening, and …"

"Let say we ignore all that," Sheikh continued, "If the bucket has a huge hole at the bottom will it remain full?"

"Well," began Omar, "depends on the size of the hole, and the rate of…"

"No ways! It will not remain full," Zaid interrupted him, and looked to Sheikh for an explanation of the analogy.

Sheikh surveyed the puzzled look on their faces and decided to end the suspense, "If we do a lot in Ramadaan, but fail to give up sinning then we are like people who are trying to fill a bucket that has holes."

Sheikh smiled and continued, "Hadhrat Abu Hurayrah Radiallahu anhu narrated that the Messenger of Allah Sallalahu Alaihi wasallam said: 'There are many such people who fast but gain nothing from their fast except hunger, and there are many such people who stand up (in Prayer) for whom there is nothing but the (difficulty) of staying awake. (Hadith-ibn Majah)' So….people may make a lot of effort, but gain nothing from it."

"Holes in the bucket," acknowledged Zaid, his head nodding in affirmation, "But why?"

Sheikh paused to sip his tea, "Because they don't give up sinning…perhaps they break their fast with haraam provisions, or they indulged in backbiting during the day. Or they indulged in some other sin that erased the good of the fasting and prayer. "

In another saying of the Messenger of Allah Sallalahu Alaihi wasallam narrated by Hadhrat Abu Ubaydah( Radiallahu Anhu) that "Fasting is a shield until it's not torn" (Hadith-Ibn Majah); which conveys a similar meaning. A shield is only useful if it's able to withstand the onslaught of the enemy. If it's damaged it's no longer a source of protection. Likewise, we have to be extra careful about not committing sins in Ramadaan.

Ridwaan leaned forward and asked, "Must we be more vigilant about sins than doing good deeds?"

"Yes, you need to be more cautious, because if you do good deeds without refraining from sin then it's like filling a bucket with holes. Holy bucket!" said sheikh nodding at Zaid, whose curiosity dragged him away from the back wall.

"That changes the whole notion of fasting," asked Zaid, now having made his way close to the front, "But that's tough…"

"From Surah Baqarah (verse 185) – Allah Ta'ala desires ease for you and does not intend for you hardship. And (wants) for you to complete the period and to glorify Allah for that (to) which He has guided you;"

Zaid nodded bashfully. "Would you eat any one of those lovely, tasty kebabs just before fast breaking time? Say with 30 seconds to spare?"

Zaid shook his head vigorously and replied, "No!" his voice a little too loud for the occasion.

"Because that would be breaking Allah's command!"

"Even by a mere thirty seconds?" asked Sheikh and Zaid shook his head more energetically.

"So we have so much self-restraint about what we put in our mouths that we won't even transgress by thirty seconds, but we take very little care about what comes out of our mouths," said Sheikh, "Allah Ta'ala has given us the ability to control ourselves, we have to use this ability to avoid all those things which earn His displeasure."

"So what's the best thing we can do this Ramadaan? "asked Omar.

"The best thing to do is to avoid sinning in this blessed month, and…and...do your best to fill the bucket. By the grace of Allah Ta'ala it will be filled which much good that will remain even after Ramadaan. So, simply, do nothing wrong this Ramadaan!"