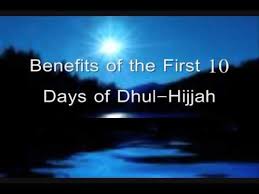 The first ten days of Zul Hijjah are among the most magnificent days in Islamic calendar. The Messenger of Allah, Sallallaahu Alayhi Wa Sallam said: "There are no days in which righteous deeds are more beloved to Allah than these ten days."(Bukhari)

Almighty Allah  Ta'ala says, (By the dawn; by the ten nights) (Quran-Al-Fajr 89: 1-2). Ibn `Abbas, ibn az-Zubayr, Mujahid and others of the earlier and later generations are of the opinion that this refers to the first ten days of Dhul-Hijjah. Ibn Kathir said: "This is the correct opinion." (Tafsir Ibn Kathir, 8/413)

THE 9TH DAY OF ZUL HIJJAH

The 9th day of Zul Hijjah is called Yowmul-Arafah (The Day of Arafah). This is the date when the Hujjaj (Haji pilgrims, plural of Haji) assemble on the plain of Arafat, six miles away from Makkah al-Mukkarramah, where they perform the most essential part of the prescribed duties of hajj, namely, making Tawbah (repenting) at the Wuqoof of Arafat.

THE FAST OF YOUMUL ARAFAH

For those not performing hajj, it is Mustahab (desirable) to fast on this day according to their calendar. It sometimes occurs that 9th Zul Hijjah falls on different days in different countries according to the sighting of the moon. In such cases, Muslims of each country should observe Yowmul Arafah according to the lunar dates of their own country.

The fast of Yowmul Arafah has been emphasized by the Messenger of Allah, Sallallaahu Alayhi Wa Sallam, as a Mustahab (desirable) act. According to a Hadith, the fast of this day becomes a cause of forgiveness for sins committed in the past and future year. (Hadith-Muslim)

Beginning from the Fajr of the 9th Zul Hijjah up to the 'Asr prayer of the 13th, it is obligatory on every Muslim male to recite the Takbir-e-Tashreeq after every Fard Salaah (in congregation or alone) in the following words: Allahu Akbar, Allahu Akbar, La IlahaIllallahu, Wallahu Akbar, Allahu Akbar wa lillahilhamd. (There is no god but Allah and Allah is the greatest, Allah is the greatest and to Allah belongs all praise.)Male Muslims should recite it in a loud voice, while females should recite it in a low voice.

May Allah Ta'aala enable us to use these blessed days in attaining His pleasure.