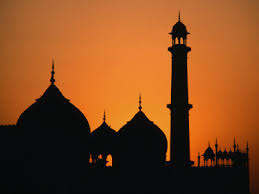 "The attendants of Allah's Masjid(mosque) are those who believe in Allah and the last day" [Quran-At-Taubah 18].

A Mosque go-er wrote a letter to the editor of An Islamic Journal and complained that it made no sense to go to Mosque. "I've gone for 30 years now," he wrote, "and in that time I have heard something like 3,000 Bayaans (Lectures). But for the life of me, I can't remember a single one of them. So, I think I'm wasting my time(going to the Mosque) and the Imams are wasting theirs by giving Bayaans(Lectures) at all ."

This started a real controversy in the "Letters to the Editor" column, much to the delight of the editor. It went on for weeks until someone wise person wrote this clincher.

"I've been married for 30 years now. In that time my wife has cooked some 32,000 meals. But for the life of me, I cannot recall the entire menu for a single one of those meals. But I do know this: They all nourished me and gave me the strength I needed to do my work. If my wife had not given me these meals, I would be physically dead today. Likewise, if I had not gone to Mosque for nourishment, I would be spiritually dead today!"

The Excellence in Going to The Masjid(Mosque)

The Noble Messenger of Allah (Peace be upon him) is reported to have said:

·         "Whoever attends the mosque, Allah prepares a special hospitality for him" (Muslim).

·         "If anyone purifies himself in his house, and then walks to one of the houses of Allah to fulfill one of the obligations laid down by Allah, then [each one] of his steps will erase one of his sins and the next will raise his degrees."

·         "The mosque is a house for every pious person, and Allah provides everyone whose house is the mosque with comfort, leisure, and a path to Allah's pleasure, to paradise."

"Allah makes the way to Jannah(Paradise) easy for him who treads the path in search of knowledge.''[Hadith-Muslim].