Hajj: The Largest Annual Convention of Faith
By S Khan 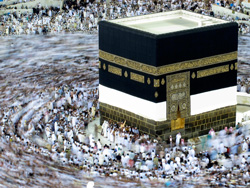 Allah states in the Qur'an, "And announce to humanity, (O Abraham), the pilgrimage, and people will come from every part of the world by every means of transport." [Qur'an 22:27]. Indeed, centuries after Prophet Abraham's call, this call to journey to Hajj is still being responded to, in numbers larger than ever before; as intended.

The Hajj is that largest annual convention of faith where millions of Muslims gather in the holy land, merging as streams of devotees from every corner of the earth to become part of the sea of Believers spiritually swirling in human waves around the Ka'bah in tawaaf. Each individual pilgrim is like a drop in that ocean; a drop that always yearns to be part of that ocean. An ocean that knows no barrier of race, nor language, nor color, nor gender, nor age, nor time.

The performance of prescribed rites (manaasik), at specified times, at particular places in a recommended manner is aimed at reflecting a wholesome demonstration of Muslim brotherhood and sisterhood. It familiarizes the pilgrim with the historic, spiritual and physical environment of Adam and Eve, Ibrahim, Isma'il, Haajar and of Prophet Muhammad (peace be upon all of them).

Each aspect of the pilgrimage serves as a religious and symbolic act, historical and social lesson that has both practical and spiritual dimensions:

Reflecting on the Lessons of Hajj

The essence of Hajj is the pilgrim's evolution toward a higher degree of submission to Allah. The performance of Hajj is an illustration of the potential strength of the community. It is a symbolic demonstration of unity and harmony; of equality and humility.

Performance of religious acts at prescribed times at particular places in a specific manner, where each act at each place has a purpose, and serves as a: