The Day of Eid-ul-Adha

The Day of Eid-ul-Adha 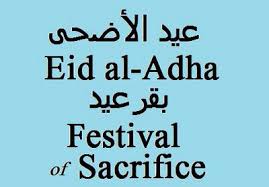 The Day of Eid ul Adha (Festival of Sacrifice) is an important occasion celebrated by Muslims globally on the 10th of Dhul Hijjah to honor the willingness of ʾIbrāhīm (Abraham)(peace be upon him)  to sacrifice his son Ismā'īl (Ishmael)(pbuh) as an act of obedience to Allah Ta'ala, before Allah Ta'ala intervened to provide him with a sheep to sacrifice instead.

When you sacrifice everything that you identify with to Allah, He gives to you your authentic and eternal self. That is the spiritual "secret" so many of us seek. Both Eid-ul-Adha and Hajj serve as a special occasion that definitely gets one in touch with this "secret".

Eid-ul-Adha is a day on which a Muslim should bring himself or herself closer to Allah by means of doing good deeds—such as Prayers, Qurbani(sacrifice),caring for the poor and the needy, visiting the sick people, helping those who are in need and refraining from evil practices such harming people and severing ties of kinship.

In short, `Eid Al-Adha is a model for the Muslim community which maintains love, care, brotherhood and sisterhood, beauty, and solidarity. `Eid has significant social, educational, devotional, and spiritual messages that Muslims should grasp and translate into a complete way of life.

ON THE DAY OF EID-UL ADHA