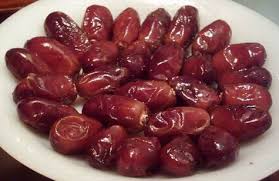 Muslims generally break their fast by eating dates. Prophet Muhammad (SallalahuAlaiwasallam) is reported to have said: "if anyone of you is fasting, let him break his fast with dates. In case he does not have them, then with water. Verily water is a purifier."
The Prophet (SallalahuAlai wasallam) used to break his fast by eating some datesbefore offering Maghrib prayer, and if ripe dates were not available, he used tosubstitute them with some dried grapes. When they too were not available, he used tohave a few sips of water, according to some reports. Modern science has proved that dates are part of a healthy diet. They contain sugar, fat and proteins, as well as important vitamins. Hence the great importance attached to them by the Prophet (SallalahuAlai wasallam).
Dates are also rich in natural fibres. Modern medicine has shown that they are effective in preventing abdominal cancer. They also surpass other fruits in the sheer variety of their constituents. They contain oil, calcium, sulphur, iron, potassium, phosphorous, manganese, copper and magnesium. In other words, one date is a minimum of a balanced and healthy diet. Arabs usually combine dates with milk and yogurt or bread, butter and fish. This combination indeed makes a self-sufficient and tasty diet for both mind and body. Dates and date palms have been mentioned in the Holy Qur'an 20 times, thus showing their importance.
The Prophet (SallalahuAlai wasallam) likened a good Muslim to the date palm, saying,"Among trees, there is a tree like a Muslim. Its leaves do not fall."
Sayyidah Mariam (AlaihisSalaam), mother of Nabie 'Isa (AlaihisSalaam), had dates as her food when she felt labour pains and during confinement. They are definitely the "crown of sweets", and ideal food which is easy to digest, and within half an hour of taking it, the tired body regains a renewed vigour. The reason for this is that a shortage of sugar in the blood is the main factor that makes people feel hungry and not an empty stomach as is often assumed. When the body absorbs the nutritional essence of a few dates, the feeling of hunger becomes appeased. When one breaking the fast with dates takes some other food afterwards, he cannot eat much. It would seem that breaking the fast with dates then helps one avoid excessive eating.
Experiments have also shown that dates contain some stimulants that strengthen the muscles of the uterus in the last months of pregnancy. This helps the dilation of the uterus at the time of delivery on one hand and reduces the bleeding after delivery on the other. Dieticians consider dates as the best food for women in confinement and those who are breast-feeding. This is because dates contain elements that assist in alleviating depression in mothers and enriching the breast-milk with all the elements needed to make the child healthy and resistant to disease. The Prophet (SallalahuAlai wasallam) has emphasized the importance of dates and their effectiveness in the growth of the fetus. He has also recommended they be given to women. Modern dietary institutes now recommend dates to be given to children suffering from a nervous nature or hyperactivity. The Prophet (SallalahuAlai wasallam) has also recommended dates as a medicine for heart troubles, according to some reports. Modern science has also proved the effectiveness of dates in reventing diseases of the respiratory system.
Sayyidah Aeysha (RadiaAllahu anhu), wife of Prophet (SallalahuAlai wasallam), used to prescribe dates for those suffering from giddiness. It is now well known that a fall in the level of the sugar in the blood and low blood pressure are among the causes of giddiness. She was also reported to have used dates combined with cucumber to treat her over-slim condition! She said, "They've tried to fatten me giving me everything. But I did not become fat. Then they fattened me with cucumber and ripe dates and I gained!" Aeysha (RadiaAllahu anhu) was quite correct, as we now know that one kilogram of dates contains nearly 3,000 calories which alone are sufficient to supply the minimum daily requirements of an active man for one full day.
Dates are rich in several vitamins and minerals. When the level of trace elements falls in the body, the health of the blood vessels is affected leading to an  heart-rate and a consequent inability to perform its function with normal efficiency. As dates are also rich in calcium, they help strengthen the bones. When the calcium content in the body decreases, children are affected with rickets and the bones of adults become brittle and weak.
Dates are also important in keeping up the health of eyes. It is quite effective in guarding against night-blindness. In the early years of Islam, dates served as food for Muslim warriors. They used to carry them in special bags hung at their sides.They are the best stimulant for muscles and so the best food for a warrior about to engage in battle.
The Prophet (SallalahuAlai wasallam) used to combine dates with bread sometimes. At other times he mixed ripe dates with cucumber, or dates combined with ghee. He used to take all varieties of dates, but he preferred the variety called Ajwah 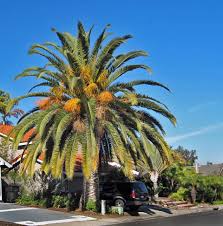 How it looks - It is a tall palm growing up to 36 m. in length with its trunk covered by the bases of petioles. The leaves are pinnate as in all palms but the lower ones are modified into spines and the flowers are in spadices. The fruits are oval reddish or yellowish brown berries with fleshy sweet pulp and hard single furrowed seeds.
What we use - Leaves, flowers, fruits, seeds
What it does -
·       Leaves - aphrodisiac, hepato protective
·       Flowers - purgative, expectorant, hepatic, febrifuge
·       Fruits - cooling, aphrodisiac, tonic diuretic
Home Remedies for the Cure of General Disorders
·       In cough, and respiratory disorders - Make a paste of dates, raisins, pepper, saunph seeds, honey and ghee and lick a tsp of this preparation twice a day to expectorate phlegm and calm respiratory spasms.
·       In dryness of mouth - At the end of long durations of illnesses, the mouth becomes dry, sore making swallowing and talking difficult. In such cases, make a paste of dates and raisins and coat the mouth with it. Hold the same paste in the mouth for a few minutes and eat it with honey and ghee.
·       In hiccups - Powder the seeds of dates, mix it with pepper powder and lick it with honey to arrest hiccups.
·       In excessive bleeding - Dates are cooling and bestow blood and are therefore ideal in bleeding conditions. Paste the fruit with honey and eat twice a day.
·       In constipation - Soak dates in hot milk for a few hours and then take the preparation at bed time to free bowel movements. Dates soaked in water make for excellent diuretics.
·       As a nervine tonic - Dates and raisins pasted with honey are excellent in nervous disorders and can be taken as a general rejuvenator.
The GREATEST BENEFIT is that it is a SUNNAH of  Rasulullah [Salallaho alaihe wassallam] to eat dates!