IMPORTANCE OF DUA IN RAMADAN

IMPORTANCE OF DUA IN RAMADAN 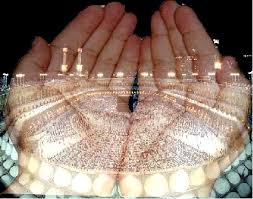 (Sallallaho Alaihe Wasallam) said, "Everyday and night of Ramadan Allah sets free a great number of souls from Jahannam. And for every Muslim during everyday and night there is a time when his dua is certainly accepted.  (Bazzaar).

COMMENTARY:  Apart from this Hadith, there are many others stating that the dua's is accepted at the time of if'taar. Unfortunately at that time we are so engrossed in eating if'taar that we have no time for dua nor do we recall the dua of if'taar. The famous dua at if'taar is: "O Allah for you have I fasted, in You do I believe, and on You do I rely and now I break this fast with food coming from you."

In this Hadith book this dua is mentioned concisely. Abdullah bin Amr bin Al Aas (Radhiyallaho anho) used to read the following dua: "O Allah, I beg you, through you infinite mercy which surrounds all things, to forgive me."

In some books we read that Prophet Mohammad

(Sallallaho Alaihe Wasallam) used to say: "O You who are Great in bounties, forgive me."

Various dua's are mentioned in the ahaadith. Remember that no special dua is fixed. This time (at if'taar) is one when dua is accepted. Submit before Allah your needs.

(Sallallaho Alaihe Wasallam) said, "There are three people whose dua's are not rejected, the fasting person until he breaks the fast, the just ruler and the dua's of the oppressed whose dua Allah lifts above the clouds and opens unto it the doors of the heavens, and Allah says, I swear by My honor, verily I shall assist you even though it may be after some time."  (Ahmad & Tirmizi).

COMMENTARY: In Durre Manthoor it is reported from Aaishah (Radhiyallaho anho) that when Ramadan arrived, the color of Prophet Mohammad's

(Sallallaho Alaihe Wasallam) face used to change. He then used to increase salaah, became even more humble in his dua's and had even more fear for Allah. According to another report he hardly ever lay down in bed until Ramadan came to an end. Further, in a Hadith it is stated that the Maalaa'ikah bearing the throne are commanded in Ramadan to leave everything else and recite 'Aameen' to the dua of those who fast. There are many Ahaadith stating that the dua's  during Ramadan in particular are accepted. When Allah has promised and His truthful Nabi Prophet Mohammad

(Sallallaho Alaihe Wasallam)  has informed us, there should be no doubt whatsoever about the truth of these reports. Yet is is strange that in spite of this, we still find such people who apparently do not get what they make dua for. They ask and do not receive. This does not mean that their dua's have been rejected. One should at this point understand the meaning of dua being answered.

(Sallallaho Alaihe Wasallam)  informed us that when a Muslim makes dua's for anything from Allah, except for the severance of ties with relatives or for a sinful thing then he definitely receives one out of the following three things: Firstly he gets the exact thing for which he made dua. Secondly, if that is not received, Allah either removes from his some great calamity in exchange for that which he made dua is kept deposited for him in the Hereafter. Another Hadith states that on the day of Qiyaamah Allah will call his servant, and say to him. "O My servant, I used to command you to ask of me I had promised to answer. Did you beg for Me ?" The servant will answer, "Yes I did". Then Allah shall reply, "You did not put forth any request which had not been accepted. You made dua that a certain calamity should be removed, which I did for you in the worldly life. You made dua that a certain sorrow should be case off you and the effect of that sorrow was even known to you. For that I have fixed for you such and such a reward". Prophet Mohammad

(Sallallaho Alaihe Wasallam)  says, that person shall again be reminded of each and every dua, and he shall be shown how it had been fulfilled in the world or what reward had been stored for him in the hereafter. When seeing that, he shall wish that not a single dua of his should have been answered on earth. So that he could receive the full rewards only in the Hereafter.

Dua is indeed very important and to neglect it at any time causes us great loss. Even when the outward signs seem to indicate that our dua is not answered, courage should not be lost. At the end of this book, in the lengthy Hadith which we will be discussing, it is also apparent that Allah in answering dua's considers first of all our own good and welfare. Should Allah find that granting what we beseech of Him is beneficial, then He grants it, otherwise not. Actually it is Allah's favor that we do not always get what we ask for, since very often, because of our lack of understanding, we beg for things which are not beneficial at a particular time.

Once again I must draw your attention to the fact that men as well as women suffer from a disease of cursing their children in their anger and sorrows. Be very careful. In the sight of Allah there are certain times when whatever dua is made it is immediately answered. So here due to our stupidity, the child is cursed and when the effect of that same dua comes over the child and lands him into calamity, the parents go crying and wailing from side to side not even realizing that this is the result of their own curse. Prophet Mohammad

(Sallallaho Alaihe Wasallam) commands us not to curse ourselves, our children, possessions, or servants.

It is just possible that this is the curse that is heard and answered at a time when all requests are granted, especially in Ramadan which is filled with such special mustajjad (accepted) moments. Hence in this month great care should be taken. Sayyidana Omar (Radhiyallaho anho) reports from Prophet Mohammad

(Sallallaho Alaihe Wasallam)  "The one who remembers Allah during Ramadan is forgiven and the one who makes dua to Allah is not forsaken."

Lastly is should be borne in mind that there are certain conditions on which dua's are accepted. Among these is halaal food. Where haraam is consumed dua is not accepted. Prophet Mohammad

(Sallallaho Alaihe Wasallam) said, "Many a greatly troubled one is distress lifts up his hands to the heavens making dua, crying, 'O Allah, O Allah'. However the food he eats is haraam,  what he drinks is haraam, his cloths are of haraam and in such cases how can his dua be accepted ?"

A story is related about a group of people in Kufa whose dua used to be always answered. Whenever a ruler was over them, they used to make dua for a curse upon him which quickly came to destroy him. When Hajjaaj became ruler there, he invited these people, among others, to a feast. After having eaten, he said, "Now I am not afraid of the dua for curse upon me from these people because haraam food has entered their stomachs." At this stage let up ponder over how much haraam is being consumed in these times when people are even trying to make permissible the earnings of interest money. We find our peole go so far as to think that bribery and what is obtained from it is permissible, while our traders very often, when dealing with people, deceive them.